She’s always enjoyed literature and books and loves to write in her spare time (whether that be poetry or short stories). She has grown up in the same city all of her life, so she has a strong connection to Dunedin and its culture. Darcy has only just begun entering her work into competitions and this year she won first place in the Poetry New Zealand Yearbook student poetry competition and will be published in the 2021 edition. Darcy often writes about experiences or feelings, and she likes to incorporate special nostalgic objects or places that make the pieces of writing feel personal and individualised. Since a young age, writing has always been a passion of hers and she hopes to continue on her story-telling journey as she moves forward.

Her story is below.

Five is me and twelve is him. May has filled the gutters with rotting leaves and wild plums and instant dinner packets dumped by careless creatures. We have gumboots on, red is mine and blue is his and the clouds above are purple . Rain throws itself like rocks and traces the lines on my young, young hands that are bigger than my brothers when I look at them up close. Maybe I’ll just look at life closer from now on.

I see it first, there! In the gutter! one baby hedgehog with skin like paper and vessels like broken wires. My Brother likes that it’s eyes are “young” like me, I see a piercing innocence that trembles behind it’s retina. It has a bodythat flounders like a fish in an ocean of earth, chained to My Brothers heavy fingers and carried back home. Our neighbours have America blasting through their windows like it was the 70’s and My Mother is watching her daily antidote of daytime soap operas that will soon be disturbed when My Brother shoves the bristled creature into my clenched fist and sprints away without a fight.

I am left with intestines on my shoe, a hard slap across the face, and a false sense of the meaning of obedience.

It’s 2005, Nan has left the dog in her will. She tells us she was sick of it and it doesn’t have a name. We decided not to give it one either. It was a mutt.

The dog sleeps in the radish patch, uses the cat-flap, lies on the good couch, soils the carpet and eats the bananas off of our kitchen bench.

The dog eats anything but the food we give him. It prefers to feed itself. Sometimes, it’s quicker than you’d think:

-- you’re not going to eat that

Sometimes, it gets out of hand. We chase it around the house, following its garden salad footprints and spinach leaves it brings in. When we finally catch it, we try to tie it up and leave it outside, but it breaks free and eats the nasturtiums from the garden instead. My Brother and I decide to name it Runaway Dog.

My Mother has a love for Runaway Dog that is hard to comprehend. She yells at it abusively, making it’s tail quiver between its legs, but then she takes a thousand photos of it, watches soap operas with it, eats dinner with it, spends more time on it’s disobedience then she does with ours. Even if that means our salads consist purely of lettuce from Paknsave.

Runaway Dog has no sense of right from wrong. It gets scared when My Mother yells and calls him a bastard mutt! or a worthless beast! But it’s a dog, and being a dog is the only excuse it needed to get away with dog things.

I'm eight on the day it leaves for good. My Mother says good riddance but she doesn’t eat dinner. She watches Shortland Street with her arm wrapped around a pillow to fill a void deprived of warmth, staring at a blank screen long after the credits have rolled away.

That night I think - If I ran, I wonder if she’d feel the same way.

There are spiders in my walls, Margie, come clean them up. I see the ropes of infestation snake up the walls in the kitchen as My Mother has a hammer in her hand, a hammer of all sorts! And I have a duster in my hand because cleaning up for your mother is the right thing to do. See that, Margie? See that nasty one there? I do see one, I see one that I have no desire to clean up.

She hands me the hammer. I want to feel mad so I become infuriated. I smash the wall in and leave the spider web dangling from the roof as I run away, running a rebellion. How free it feels to obey myself and not be chained by My Mother’s inhumane power. I am running and running and I stop and start walking, because I am not fit and will not be forced to run for periods of time longer than I desire.

A black horse stands in the distance, chained to a fence, with a bathtub of drinking water and mudded sand that clumps at the bottom of it’s spidery legs. It looks as though it’s been chained before, the chain wrapped tightly around its neck two times over. I should set it free like me, I think to myself. Then it will feel liberated. I think about this as I move past the horse and into the softer mud surrounding it. My Mother is probably worried, My Brother is probably out looking for me. I think this with satisfaction. Is this what people in power feel like? I’m going to be Prime Minister one day.

It’s getting dark and I can’t see my limbs anymore. For all I know, I could be a floating mass in the middle of the sand like a large seaweed patch in the ocean. I long for food, and I have no water. You can only survive four days without water before you drop dead.

Black Horse is invisible now, so no one would see me if I undid the chain around its neck, but I decide I don’t have the energy to let it be free. Instead, I drag my feet and trudge back.

At home, I ask my mother (with a mouthful of salad) why she didn’t come looking for me. She answered what I already knew.

- I knew you’d rather be stuck at home with food and water than free and dying of hunger.

Later on, when I’m fetching My Mother a cup of tea, I notice the spider's nest is gone, the carpet is soiled with gumboot mud, and the hole in the wall has been covered up by a picture of the Runaway Dog. 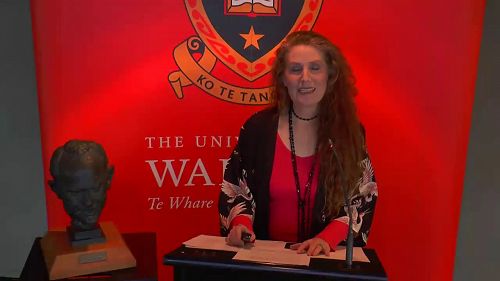