We have a beautiful new artwork adorning the Gymnasium and facing the road for mountain-bikers, visitors and our school community to enjoy.

Thanks to artist and teacher Guy Howard Smith who finished the mural over the summer holidays. Guy is a well known and respected New Zealand artist and this latest mural depicts Dunedin's beautiful environment and wildlife. It has a specific focus on our area with a giant red band gumboot wearing kereru and other native flora and fauna from the area. Guy says, "It's supposed to represent what's in the little stream that runs down the side of the school."

Guy explains his mural below:

"The Mural was inspired by a student from the Learning Support class. He regularly catches and releases Koura/fresh water crayfish in the creek (Omimi) next to the school. When the road was widened and the trees were felled we noticed a build up of silt and all the kuora were coated in it. We did some research and discovered 95 percent of fresh water crayfish are found in streams shaded by native bush. We also have found what we think are red-finned bullies and Koaro a type of native Galaxiid. I have included these three species in the mural.While I was painting the mural one day a common skink was basking on the concrete beside the mural and dragon flies regularly flew by as did Kereru so it is fitting they are also in the mural.I was amazed by the native wildlife in this small stretch of stream considering that it is only about 500 meters long sandwiched between two culverts. Certainly the Koura must be a resident population and we were concerned that the tree canopy had been removed with no attempt to replant. Every time we go down there the Learning Support class pick up at least two bags of plastic rubbish.

The mural was painted to draw attention to this treasure in our backyard with the hope that maybe the students of Logan Park might want to help protect it." 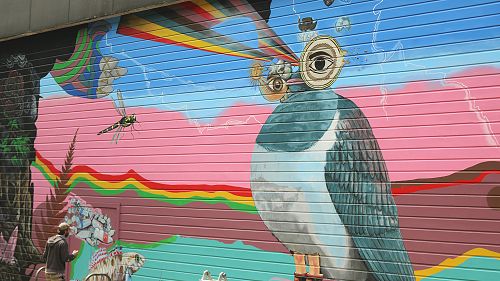 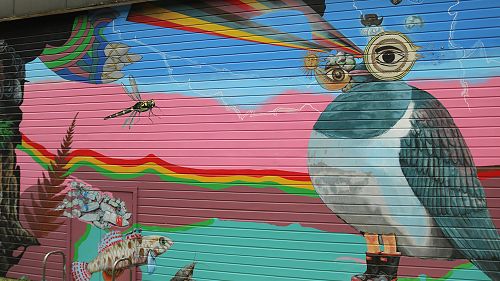 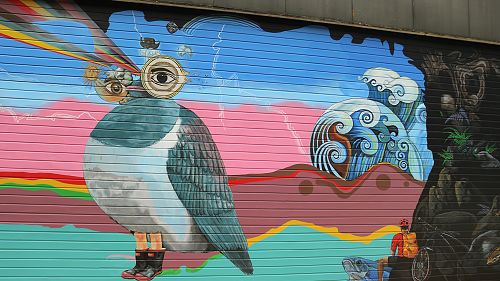 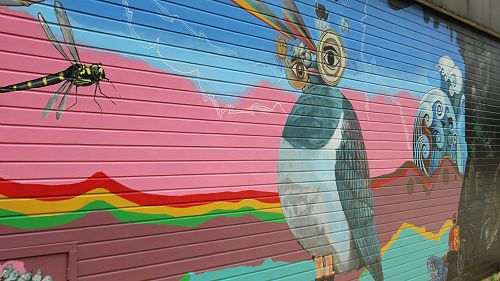