Congratulations to Grant McNaughton, Year 12 who won $5,000 for his outstanding scientific presentation as part of the National Eureka Sir Paul Callaghan Award Finals, in October, in Wellington.

Grant and university student Sam Hall-McMaster were selected to represent Otago at the national finals in Wellington where 12 of the top young scientists from across the country pitched their presentations.

Grant is passionate about increasing scientific literacy. He thinks science teaches us to be critical and objective thinkers. The overall winner of the national event was a university student.

Grant won a Gold Scholarship from the New Zealand Treasury for the presentation that showed the greatest improvement in living standards in New Zealanders.

On the 9th-10th of October, I attended the Sir Paul Callaghan national Eureka science symposium in Wellington, organised by the rotary club of Wellington. The event was an opportunity for 6 high school students, and 6 university students to convey an idea of science to an audience of judges and various sponsors from many different science based organisations. Sir Paul Callaghan was a New Zealand scientist who had a dream for New Zealand to be a place where talent wants to live, unfortunately he died in 2012 of colon cancer, so the symposium was created to commemorate his contributions to New Zealand.

On the 10th, we gave our presentations. The subjects were of amazing diversity, and all the speakers were amazingly engaging. After giving a speech, we would be questioned by New Zealand’s very own Kim Hill. Kim’s questions were designed to get at the heart of the presentations, and she made the presentations even more engaging. Kim was also a judge on the panel. I spoke about the importance of scientific literacy for New Zealanders.

After the speeches, there was an awards ceremony at Government house. Which is the residence of The Governor-General, Lieutenant General The Rt Hon Sir Jerry Mateparae. The venue was extraordinary, and it was an honour to see the interior of the house. At the awards ceremony there were many guest speakers, from Sir Paul Callaghan’s brother, to the governor general. The overall winner was Sam Hall-McMaster, from Otago University, talking about the potential of Nano-Technology for New Zealand. I won a scholarship from Treasury for the presentation that had the potential to improve the living standards of New Zealanders the most. I was also interviewed for a science programme on the Radio New Zealand called Our Changing World.

The Eureka awards were an amazing experience, which I will remember for the rest of my life. I met some amazing amazing people, and have learnt a lot about the world of science. 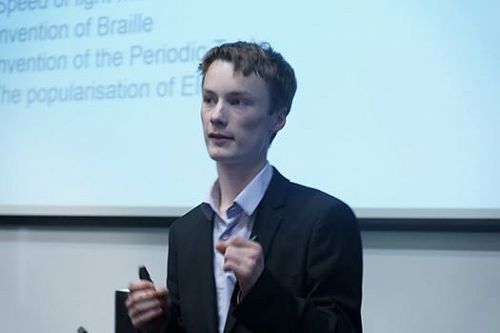