2016 was an industrious year for the Science department. Dr Prime had a disruptive start to the year, as he waited for room 21 to be completely renovated but is now well and truly settled in.

We also welcomed Mr Sewell as a teacher of junior science; he has wonderful outdoor skills and has been part of the Climbing Club with Mr Biggin and teacher helper on both Year 10 camps. Mr Pirie attended SciCon (the national Science teacher conference) in Wellington and also hosted the annual Otago Biology teachers meeting. Mr Pirie’s Year 11 students have been treated to the fruits of Mr Pirie’s 2015 sabbatical research where he looked at a variety of active approaches to teaching.

Ms Caulfield continued her good work with the Enviroschool programme, attending an open day at Macandrew Bay school and for the second year, her Year 9 students have been tracking and recording what animals can be found in the Logan Park environment. This data contributes to the Backyard Biodiversity programme. Ms Caulfield is excited to have been accepted onto the Royal Society Science Leadership Teaching Programme and will be working with the Geology Department at the University for the First Half of the year. On her return she will be using the skills she has gained to benefit our students. Dr Thompson has been acting convenor of the Otago Science Teachers Association (OSTA) for the past term and was quiz master for both the Dunedin OSTA Year 10 Science and Year 13 Chemistry quizzes. The Otago University Senior Chemistry quiz was won by a LPHS team comprised of David Spencer, Henri Gaudin and Grant McNaughton (a team of 3 that beat other teams of 4 students), this was only one of many successes this year.

We would like to acknowledge the fabulous contribution of high quality microscopes from the Anatomy and Physiology Department at the university, facilitated by Andrew McNaughton and also Professor Molteno's generosity over recent years.  These high quality microscopes have revolutionised our cell biology teaching and learning at all levels. We also had donations of glassware from the Chemistry department and Human Nutrition department at Otago University. These donations were facilitated by our wonderful science technician Ms Daly.

While all this was happening, we had several weekends of work to tidy up our courtyard and to develop it into an outdoor teaching facility focusing on local biodiversity. We had a donation of tadpoles and they have taken up residence in the bathtubs which have also developed a diverse variety of single celled organisms which have had regular star turns under our new microscopes.

Here are some words from our amazing students and staff;

In January this year I was lucky enough to be selected as one of six New Zealanders to attend the National Youth Science Forum held in Canberra, Australia.

From the opening ceremony at Australian Parliament House until the final day, it was a non-stop programme packed full of activities across a wide range of scientific disciplines.

We video conferenced with the Large Hadron Collider at CERN in Geneva, heard the 2011 winner of the Nobel Prize in Physics speak (about his discovery of evidence that the expansion of the universe is accelerating), and attended many fascinating lectures, lab visits and workshops.

One highlight for me was taking part in a fossil dig alongside palaeontologists in Conwindra, New South Wales, and being able to take home the fossil I found there.   My group’s focus was Earth and Environmental Science, so some of our activities included visits to the headquarters of Geoscience Australia, the ANU Research School of Earth Sciences, and the Commonwealth Scientific and Industrial Research Organisation (CSIRO).  We visited the ‘Canberra Deep Space Communications Complex’, where spacecraft communicate with mission teams on Earth as part of NASA’s Deep Space Network.  This facility has the largest satellite dishes in the Southern Hemisphere (more than 70m in diameter!), one of which received and relayed the 1969 moon landing to the world.

There were also many chances to socialise including a quiz, a concert, a dance, two formal dinners and trips to the Australian National Botanic Gardens and the National Zoo and Aquarium.  Not only was it a fantastic experience for anyone interested in a career in science, it also was an incredible chance to meet people from across Australia and the world.   Despite being named the ‘National’ Science Forum, there were students in attendance from Germany, Iceland, Thailand and elsewhere.  I was honoured to be given this once-in-a-lifetime opportunity and am immensely thankful to Dunedin Rotary who supported my application.

At the beginning of the year, Katherine Woolrych was selected to attend the Australian National Science and Technology Youth Forum 2016, and Ruairi Griffin and Grant Mcnaughton were selected to attend the New Zealand National Science and Technology Youth Forum 2016 by the rotary club of Dunedin. The New Zealand National Forum involved two weeks of visits to scientific institutions in Auckland, lectures from speakers, and a very full timetable of social events. After the experience we returned to Dunedin with friends all across the country. During the forum we stayed at University Hall which was both an amazing experience to be constantly around like minded people, and to experience university life. A notable experience that stood out was seeing the University of Auckland’s department of biomedical engineering, where we saw how science is being used to make people’s lives better, healthier and longer using technologies like wireless charging of batteries of pacemaker batteries to avoid the need of multiple surgeries to replace batteries or treat infection caused by wires going into the body. The experience as a whole was unforgettable and we would highly recommend the course to students who have the opportunity to apply in future.

In September, the Year 13 Physics students spent the day touring the Physics Department at the University of Otago, meeting the lecturers and postgrads and getting a great insight into the research and everyday work going on in the department.

The day started with a tour of the Coastal Sea Ice research labs starting with the warm lab at minus 3°C, where we received our super-cooled mineral water drink bottles that froze solid as soon as they were shaken and learnt about the very varied anatomy of sea-ice formations. The really cool experience then got even cooler as we progressed to the cold lab at -18°C to look at thin sections of ice formations under polarised light and learnt about the differences between Arctic and Antarctic ice sheets and cycles.

The day was a fascinating mixture of lab tours with the Experimental Physicists and seminars with the Theoretical Physicists. We had a chance to capture and photograph single atoms and see our hands made invisible using a lens cloaking system. The variety of topics was impressive with talks and demonstrations on Ultra Cold atoms / Bose Einstein Condensates and the interactions of light and matter, through to quantum information processing and superconductors. Our thanks go to all the staff at the Physics department for making us so welcome and it was nice to catch up with several ex Logan Park Students who are currently studying Physics at Otago University.  A special thanks to our former Head Girl Helen Prime who is a second year Physics student for organising such a great day. 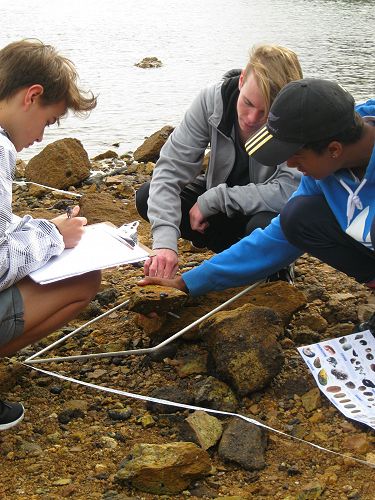 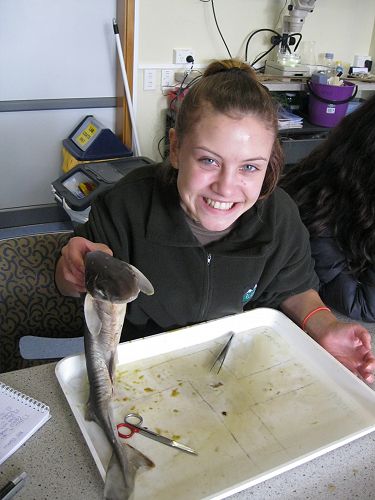 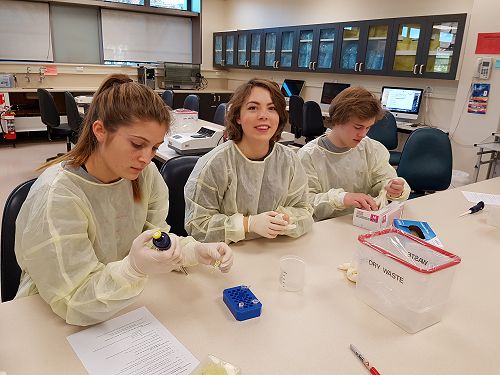 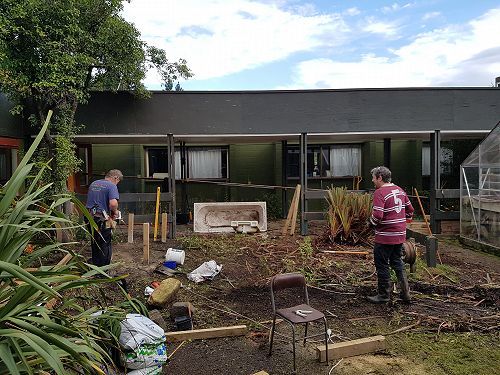 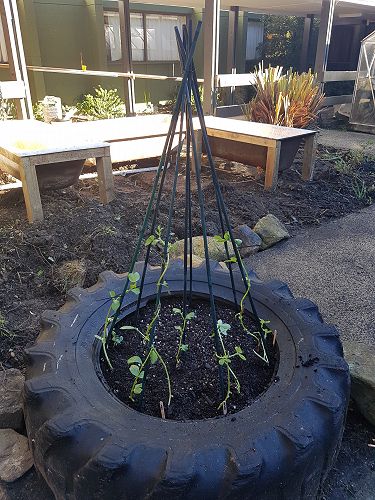 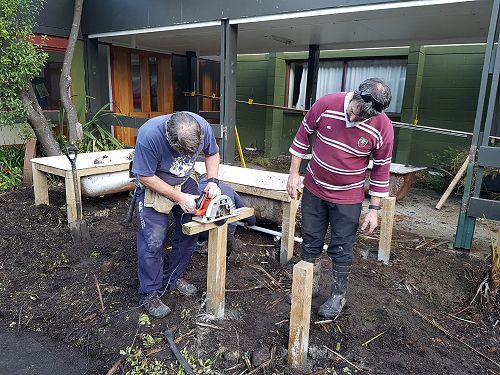 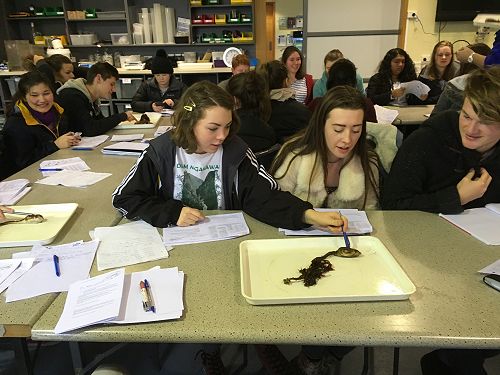 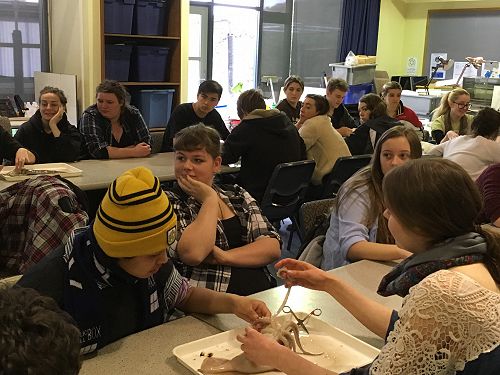 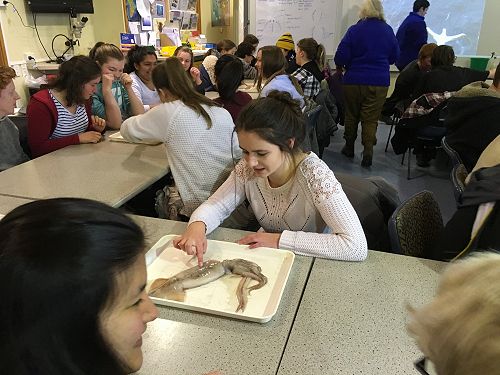 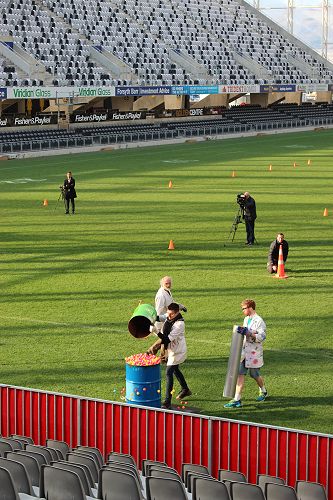 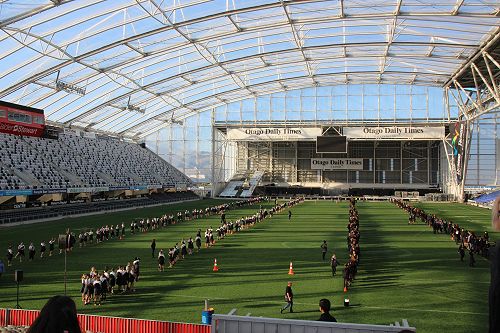 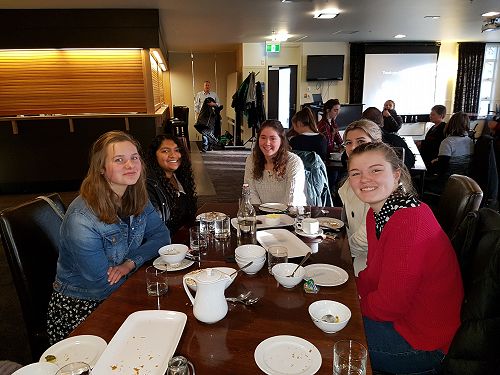 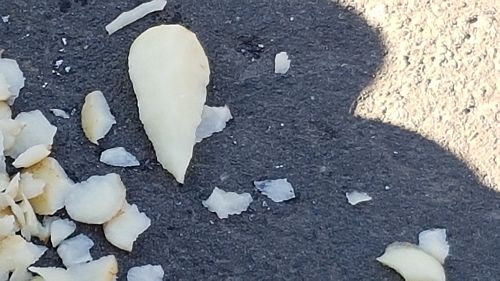 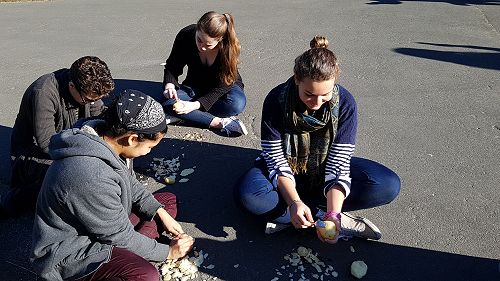 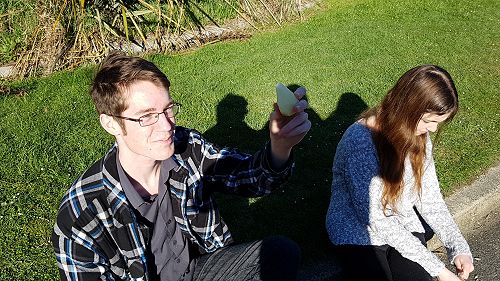 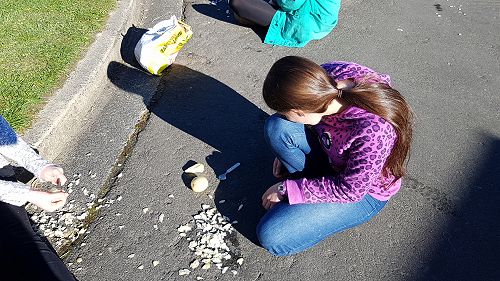