Congratulations to all six Logan Park entries in the regional Shakespeare competition in April. Our 5 minute piece won the regional section and goes through to the nationals.

The standard was extremely high and all the students can be proud of their creativity and hard work. The calibre of student directors was superb.

A Midsummer Night’s Dream with Casper McGuire (director) Gabe Kovaks, Finn McKinlay and Lichen Sorrel. They won the award for Best Use Of Costume with their Bob the Builder Costumes.

Year 12, As You Like It, with Cuba Rust, Lucan Willis, Bella Rennie and Rikke Kikkawa-McLeod.

Year 13, The Taming of the Shrew directed by Pania Throp with Josef Belton and Maegan Stedman Ashford, was a creative and superbly realised scene that is a real credit to the students involved.

Our adult directed piece 15 minute scene by Luke Major was Twelfth Night which was runner up and also earned Best Use of Music. Thanks to Luke for his vision and  hard work with our talented team of Year 12 students.

The actors directed their own performance and came up with a chilling, cut and paste narrative and dual-voice chorus that both explained and critiqued Lady MacBeth’s contentious and regrettable motivation to persuade her husband to murder the Scottish King Duncan while he was their guest.

As a result of their regional Festival win, Ahi, Oscar and Josef have been invited to perform as representatives of LPHS and Otago Secondary schools at the National Sheila Winn Festival in Wellington in July. Our new HoD Drama, Diane Dupres, will accompany this talented LPHS Year 13 team.

Another LPHS team of Year 12 students was runner-up in the 15 minute extract section, directed by ex-student, Luke Major, who was a member of the NZ Secondary Schools’ Shakespeare team to perform at the London Globe in 2016.

Their performed extract was from the comedy Twelfth Night, which provided plenty of scope, humour and comic irony for the lead actors to play on gendered disguise within a love triangle. Lucan Willis played the love-blind Orsino, oblivious of his messenger’s love for him. Meanwhile his young friend’s wooing of Olivia, played with confidence and panache by Cuba Rust, caught Oliva off-guard and she fell in love with Cesario disguised as Viola (played thoughtfully by Bella Rennie). This 15 minute, high-paced love intrigue was much appreciated by the large audience, including the incorporated Shakespearean ballad played sensitively by Bene Holloway and Rikke Kikkawa-McLeod. Other strong actors in the cast were Connor Vosh, Quinn Hardie, Eamon Wilson, Rosa Miller and Olivia Bradfield. 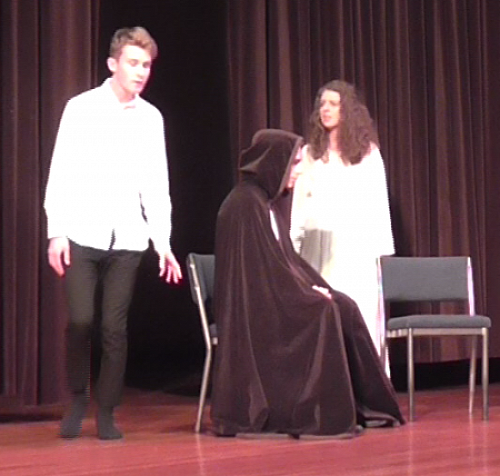 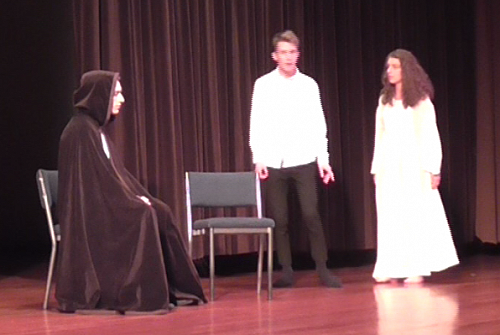