We have had a number of successes this year in Public Speaking.

At the end of last year, Jacobi Kohu-Morris won the Otago Secondary Schools Junior Competition.  And at the start of this year,  Jake and Connor Seddon spoke persuasively in the Otago final of the Race Unity Speech Competition, with Jake winning and going on to the national final in Auckland.  He spoke convincingly and was runner up in the NZ final against 20 other Year 13 students from around the country.  An impressive result given Jake is only in Year 11.

Charlie Ruffman won the Dunedin final of the Rotary Club 4 Way Speech competition.   And Jake won the English section of the Otago Southland Nga Manu Korero Speech Competition with Flayme Wharerau coming third in the Maori section. Jake competed in the national final in Hamilton with wonderful support from the Kapa Haka group.

Our Junior Speech competition featured lots of new talent, including Ruairi Griffin, Grant McNaughton, and  Naomi Ashby-Ryan speaking on a range of interesting topics.  Oscar LaDell won the Year 10 section and and Oscar McGuire won the Year 9 section.  Oscar McGuire has had some really impressive results in speaking this year, earning top in New Zealand in Grade 6 in the NZ Speech Board exams.

Oscar LaDell went on to win Otago Best Junior Speaker at the regional finals against 11 other schools. 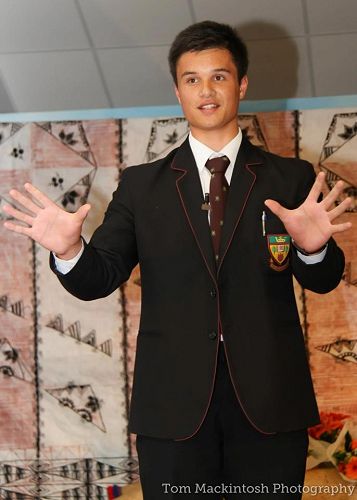