Florence Sorrel (Yr 13) was placed first in New Zealand for her essay on Romeo and Juliet exploring roles of masculinity and masculine identity. Leah Cooke-McDonnell (Yr 10) was placed third with her essays on A Midsummer Night's Dream analysing the theme of Love and the character Helena. This is the first time a Year 10 student has been placed in the national competition in its 35 year history. Bruno Willis (Yr 13) won the Costume Design Competition for his Oberon costume. It was brought to life by the Toi Whakaari Drama School's costume department, and Bruno referenced Dunedin fashion and making use of recycled material and sustainable fashion.

Jimmy Robinson (yr 13) and Luke Major (ex-student) were selected last year as 2 of the top Actors in NZ and traveled with the Sheilah Winn Shakespeare team to London and the Globe Theatre during the July holidays. Both boys were part of the Othello team who won the top National award last year, and Luke won the Outstanding Student Directed Design/Costume Award for his Love's Labour's Lost interpretation. Head Girl, Reva Grills won the top Actor award for her role as Emelia in Othello.

Additionally Head of Drama Sarah Spicer won an international scholarship to travel to the United States for 6 weeks to study contemporary American literature. 18 people were selected from around the world, and Sarah was the only New Zealander selected. She toured around universities giving lectures and learning about American literature. Sarah loved that she was able to bring back new insights for her Drama classes. We held a celebratory morning tea to celebrate the Shakespearean successes. 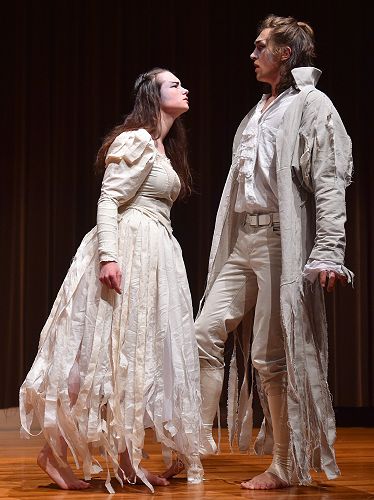