Congratulations to Henry Eden-Mann and his team who won First Place in the Senior Theatre section of the National Robotics competition in Auckland in September.

Henry and his team (Sebastian Sole, Annabelle Ritchie, Beldon Holt) created the robotic band Underscore. The group won the Otago regional award and were selected to compete at the nationals.

The band consists of robots playing a synthesizer, ukelele, drum, triangle, rattle, coconut drum, shaker and slide whistle. An empty wine bladder is used as an air supply reservoir for the whistle. Henry said to create the right whistle sound required software to regulate pressure, a robot to open and close a valve and a server to determine the pitch. The band performance ended with the robot firing a party popper sending confetti skyward.

Check out the video performance in the gallery. 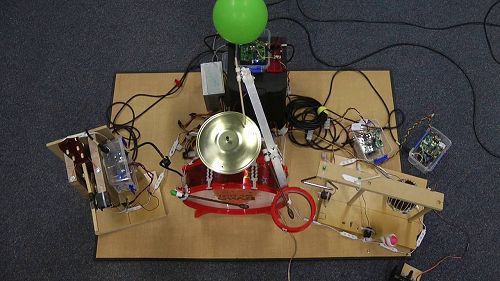