Service to Sport recognised by Award

Paul Fielding's pride in the simple things on a local stage have gained him national recognition.

It comes as a result of a 30-year involvement with sport at the school, primarily coaching cricket, football and badminton.

It is cricket where his biggest passion lies, and it is there that his proudest achievement has come.

While numbers in the sport have dwindled and many schools no longer field teams, Logan Park has always had a team on the park.

''Some years we just have people, but we've kept it going.

''That's what I'm most proud of over the years, always having a cricket team.''

He believed there were a lot of reasons for cricket's decline.

Playing on Saturdays, the length of games, the range of other sports, the loss of cricket from free-to-air television and the prospect of being cancelled for rain were among those.

Solutions were being introduced to address these issues, although Fielding conceded it would be a hard fix.

Fielding has been at Logan Park's games every Saturday for the past 30 summers.

A competitive person, he encourages his teams to play to win - or give that their best shot - rather than just participating.

It was something he enjoyed and he often umpired games and occasionally stepped in on the field if the team needed an extra player.

''There's nothing better than having a young person who grows and develops a passion and love for the game.

''With cricket you either love it or you hate it.

''You can tell with a student if they love it they're going to talk to you about it all the time.

''You just think 'there's another cricketer for life'.

''... most of them who have carried on have contributed to the clubs.

''They've been club captains, they've been on the committee, they're playing second grade, third grade.

Two years ago he retired from football, in which he was a goal keeper for Grants Braes.

And he continues to coach.

The Logan Park first XI has five year 9 pupils in its team, and Fielding is looking forward to developing them over the next four years. 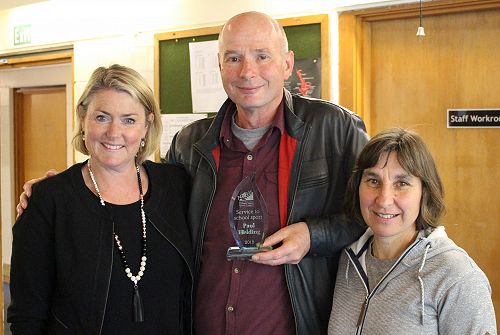